Why are OUR parades “Bike Free”?

Some of our group went up to Antioch with our kids last weekend to watch the Easter Parade through town, followed by lots of kid-friendly, post-parade activity at Williams Park at the end of the route. 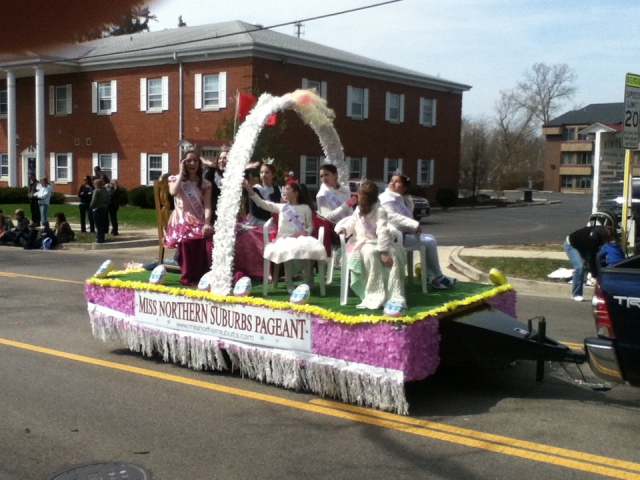 One of the parade entries was Cub Scout Pack 190, obviously bicycle based.

Cubs Scouts representin’ their pack to the townspeople of Antioch.

What a contrast, to actually ALLOW parade participants… on bicycles… better yet, little participants on little bicycles… on a state highway (Rt. 83).

For desert, the parade route stayed “Closed to cars” (even though the parade was over!) while everyone piled into the street, followed the last official float, and WALKED to the park.

This is just the tail-end of the procession of towns-people. We were so in-awe of the participation we were watching we almost forgot to take pictures of it!

The next time any of us (or any of YOU) is representing a group which wants to participate in a RL-area parade with a bike entry and catches any flak about how “Bicycle entries are not allowed because they are unsafe”… stand your ground and don’t take any cr@p.

Point that (presumably) well-meaning desk-jockey towards this post, then politely ask that functionary what Antioch (Pop. ~14,000) has clearly figured out that we in the Round Lake area villages (Pop. ~60,000) haven’t yet.

While they are trying to punt with talk of “…but our insurance…” and “It was decided many years ago…”, take note if the entry form even lists Bicycles as a type of entry (’cause it probably won’t).

Community parades are one of the most participatory and visible forms of civic participation. Any bias in “allowing” floats/entries should be in favor of the participants, with the organizers having the burden-of-proof as to why any entry should not be allowed!

This entry was posted in Bicycling, Children, Community. Bookmark the permalink.