This picture shows the healthy, loaded apple tree in front of the RLB Village Hall, southwest side by the RLB Police Dept offices. The apples have a nice crunch, and a wonderful sweet/tart flavor like Gala or Braeburn.

One of the few things worse than not having enough food is knowing of perfectly good food which is either wasted, thrown-out uneaten, or allowed to rot.

Throughout many of America’s suburban areas, built on formerly-productive farmlands, there are countless pockets of nature still regularly producing tasty and nutritious edibles. Sometimes a home with productive landscape has a new owner who is unable to or uninterested in maintaining or harvesting.

Others tend to be at extreme corners of commercial lots which were spared the ravages of the bulldozer, where a bit of Illinois’ awesome topsoil was allowed to remain, or scattered token “undeveloped” areas left in their natural state as a developer’s concession to tearing up the rest of the property. (Many of these become the sanctuaries for the “urban wildlife” which cruise our neighborhoods at night while we sleep.)

Leftovers of orchards and kitchen gardens of the former owners can be found along with “naturally planted” examples thanks to the robust natural processes of plant propagation, resulting in fruit and nut trees, vines, and perennial vegetables, in (usually) healthy soil, in (usually) accessible areas… but completely forgotten about, unclaimed, not-maintained, and unharvested.

The abundance goes to waste. 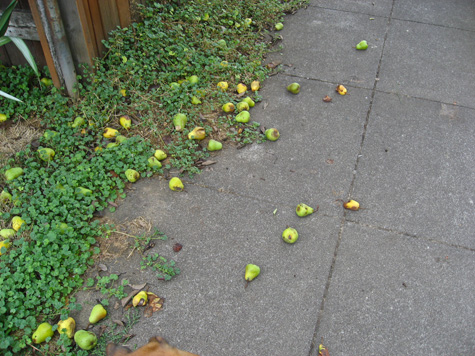 Sometimes the fruit is not “commercially-viable”, due to fragility, or short shelf-life. Two leading examples are Mulberries and Paw Paws, both fruit native to the US yet strangely absent from grocery stores… and our plates. There’s even an “Illinois Everbearing Mulberry“, just to show you how perfect they are for our area.

Easy to harvest. Just spread a bedsheet or tarp under a loaded branch and shake gently.

Farms and large orchards often follow a biblical principle of allowing “gleaners” to come in after the main harvest to collect the left-over and missed crops for feeding the poor in the community. We in the ‘burbs are largely disconnected from food-production processes, so the concept of “unharvested food which can be collected” is foreign to us.

So to is “foraging” for food in our neighborhoods.

What used to be a fairly common practice, even in urban areas, has fallen out of favor due to a variety of factors:

Our “orphan” food producers have no organized system of gleaners, are too scattered and have too many owners and legalities to make harvesting them commercially viable. Yet we have hungry people in our midst… maybe even next door neighbors who are one  paycheck away from losing a house.

What to do? How will we rescue these valuable resources going to waste?

Enter individuals and groups doing what “the system” can’t! As one part of a growing awareness of sustainability, of “We’re all in this together!”, of neighbor helping neighbor, of not letting things go to waste, of re-connecting to the world around us, and much more…

… individuals are working together to identify useable “Falling Fruit” in villages, towns and cities all across the county, making their locations and other information about them easily available via the internet. The information can be used by individuals either for their own uses or to gather fruit to donate, or by the groups themselves as community service groups donating time and labor in collecting fruit and donating it to local food banks. 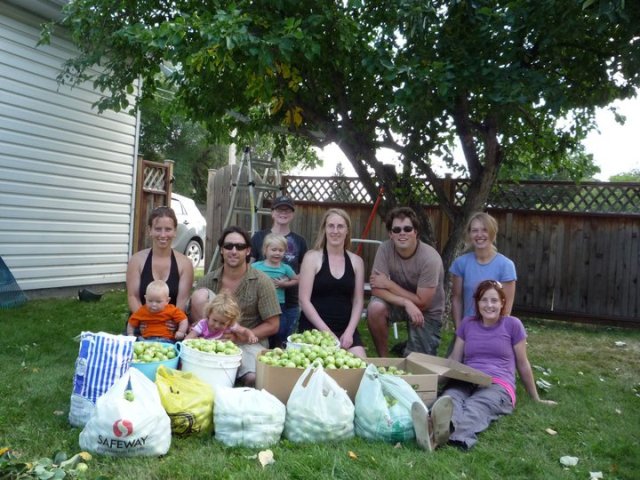 In the case of elderly, physically-challenged, or otherwise overwhelmed homeowners  who are unable to maintain and /or harvest from the trees or vines on their property, offer to “Adopt a Tree”. Many times they are simply happy to have SOMEONE finally be able to make use of the fruit or nuts which otherwise become a nuisance to clean up every fall. Some communities actually have groups which actively “tend” the fruit producers on various properties almost as “communal” property, leading to a Win/Win with healthy fruit not gone to waste, properties not spoiled with rotting produce, and fresh tasty goods connected with people who want/need them. 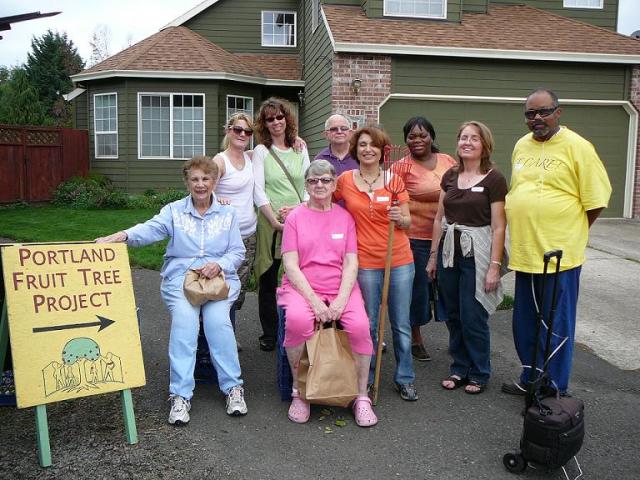 Some community groups have scoured their neighborhoods to locate the goodies and produce foraging maps for anyone in their town to use:

So how does all this relate to our Village Hall apple tree, and other producing fruit & nut plants in our area?

Well since the Village obviously has laid no claim on the produce (as you’ll see below), we have taken the helpful step of entering that tree (and a couple of others in the area) into the Falling Fruit database. This way, those willing to put in some effort to harvest the apples next fall (for either their own use or to donate) know that the tree/fruit is available. Maybe a local Boy Scout project? 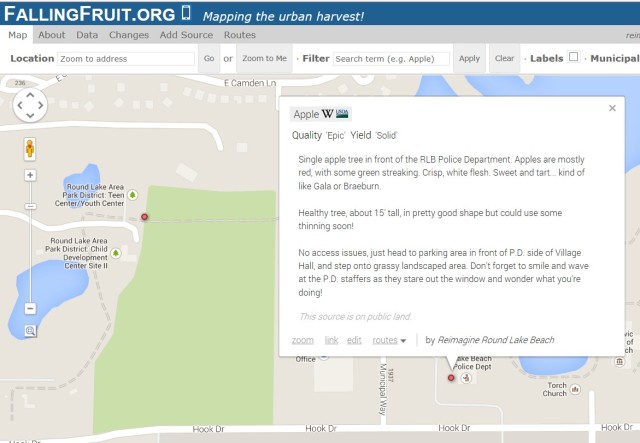 Click the picture to go to the “Falling Fruit” website. Zoom in on the map to see what opportunities exist in your neighborhood. If you know of others, you can enter them yourself or let us know in a comment to this post; we’ll verify ’em and add them to the database!

So, here’s the apple tree at the Village Hall today… 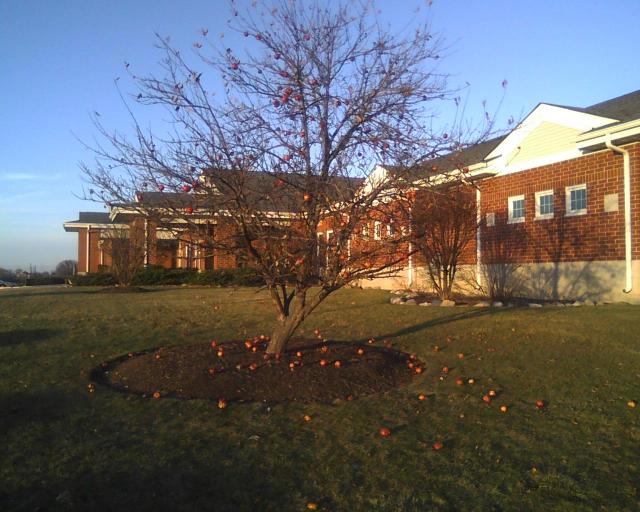 This entry was posted in Local Food Production, Parks, Resilience. Bookmark the permalink.