[ The Round Lake Bicycle Club asked if we could post this on their behalf, since they don’t have their website/blog up and running yet. This is a very relatable topic, so of course we said “Yes!” ]

The new RLB Hardee’s. The bike rack is on the far side of the entrance doors shown in the right of the picture. Photo Credit: Round Lake Area News

The Short of It: We evaluated the bike rack at the new RLB Hardee’s. It’s… not so good.

The Long of it: So when we heard that the old A&W/Long John Silver’s was going to be converted to a Hardee’s, we made sure to send a rep to the Planning & Zoning Commission meeting where the Hardee’s folks would make their pitch to the village, so that we could make OUR pitch at the same time… for a bike rack! Not only for us locals;   RLB is the only downtown which will have the Millennium Trail pass through… the cyclists using it will research “bike friendly” establishments in advance and expect to use them!

Whether they saw the sense in it, or we guilted them into it, the Zoning Commission saw fit to make the addition of a bike rack part of their acceptance of the Hardee’s proposal. The Hardee’s rep wasn’t too keen on the idea, citing over 50 locations in their region and only ONE spot with a bike rack.

Here’s where (in hindsight) it fell apart. “BE CAREFUL WHAT YOU ASK FOR… YOU JUST MIGHT GET IT!” We were so happy to finally get an “OK, we’ll do it.” that we didn’t think to stipulate that it had to be a good or useable bike rack according to current standards.

Fast-forward to now. Over the last few days, several members of the local cycling community, including some of our members, made their way over to the soon-to-open Hardee’s to give the bike rack there a “test drive”. The reports that made it back to us were so unfavorable that we went out specifically to evaluate the rack, as objectively as possible. Here’s what we found:

Not much to it, is there?

Now in evaluating bike racks, the cycling community often gives either a simple “Pass” or “Fail” based on one absolutely undesirable characteristic: “Is it a wheel-bender?”
– Does it hold the bike with at least TWO different points of support, or does it hold the bike up ENTIRELY by PART of a wheel?

Up ’til about the mid-70’s. most bike frames were made of steel, and the wheel rims were wide and fairly thick. Bike racks of the time reflected this ruggedness; bikes were supported by their front wheels only, but usually survived.

A modern bike. but it illustrates the idea well.

Unfortunately, many planners and government officials think that these old-style “playground” or “school” bike racks (which were common when they were kids back in the 70’s) are still suitable for today’s bicycles.

Today’s bike wheels, being usually narrower, lighter-weight, and thinner, can be bent over like a potato chip. We regard this as a “bad thing”:

A Trek “Mountain Track” bike in a “wheel bender”. Yup, the front wheel is bent, even though the wheel is thicker and stronger than a “road” bike.

Other factors besides wheel-bending include points of support, bike rack capacity, space between bikes, security/locking options, location/convenience (not just for the cyclists, but pedestrians and customers), and more. So lets take a look. 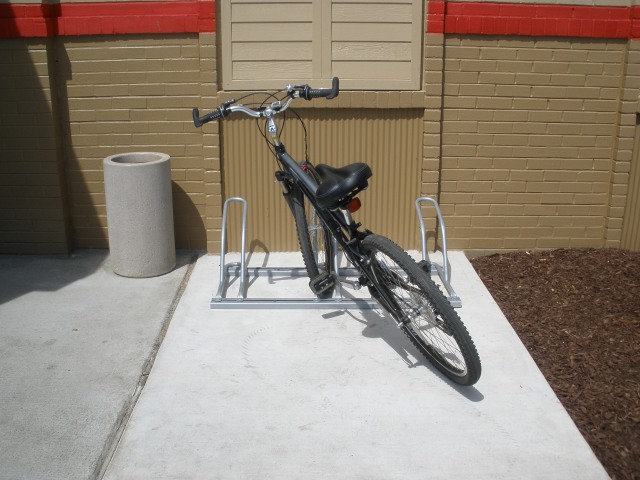 First thing we did was to confirm that, yes, this is a “wheel bender”! You can clearly see that with the bottom of the wheel held by the rack, the weight of the bike is pulling the top half of the wheel to the left. Unless you ride up with a BMX/Mountain Bike, you stand a fair chance of bending a wheel, whether holding the front OR rear wheel.

That said… if you have a kick-stand, this become slightly more useable. A kick-stand is meant to have the bike leaning however, and each station is designed to hold the wheel vertical, so the bike has to be “cocked” or angled as if turning to allow the kick-stand to actually touch the pavement. For a full bike rack of 2-point supported bikes: 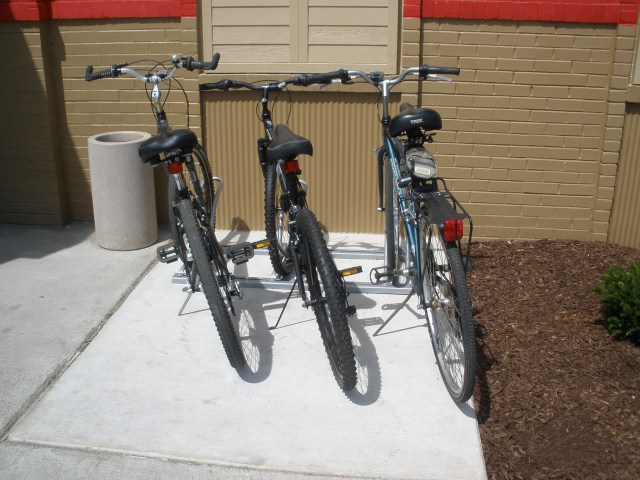 Notice that in this example, every bike has a kickstand (’cause that’s how we roll”)! A significant percentage of modern bikes do not come with kickstands, especially bikes designed for kids/teens. If you’ve ever visited a convenience store or fast-food restaurant and seen a pile of bikes lying on the sidewalk in front of, or leaning against the wall, you can understand.

Other issues include the space between bikes, which as shown here, could all be adult/full size. Between the left and center stations is only 18½” inches; from the center to the right is 21½”. Optimum spacing for bikes, from center to center is at least 24″ to prevent handle bars and cables from conflicting, to provide access to bags and accessories, and to allow access to locks/cables without knocking-over adjacent bikes (which is very easy to do with this rack).

Note the handlebars all fighting for the same space… that’s another problem with this type of rack.

Notice how close to the wall the front of the rack comes. Getting access to your bike lock can be problematic if you have the middle rack, you have to squeeze in next to the cigarette butt can for the left, and on the right you can find yourself standing in the wet mulch/mud depending on recent weather. Not fun.

The security aspect is lacking too. With an optimum situation, a bike rack can support locking at least one wheel AND THE FRAME to the rack. With a very high value bike, you pop-off the front wheel, and lock it along with the rear wheel; it can all be done with one D-lock or cable if need be.

With this rack however, using the preferred “D”-lock, the only thing you can lock to the rack in the front tire! Since most bikes now come with a quick-release mechanism for each tire, you can still quickly lose a bike.

– You may say that chances of a bike theft right outside the front door are slim, but thefts of all kinds happen in broad daylight, surrounded by people, every day. Just act like you belong there and no one will question you. It’s pretty easy to get a front wheel for a $400-$500 bike that you got for free!

We looked at the convenience/safety factor. Was this bike rack, loaded with adult bikes, going to cause an access problem?

Looks OK from here. How about its proximity to the door… too close?

Looks tolerable, as long as no bikes are leaning over.

Another issue we have is where any extra bikes might park without blocking access for eat-in customers. Drop ’em in the mulch? There’s not a lot of extra sidewalk, and the three stations can fill up quickly.

Lesson Learned #1: Be precise! We presumed that in this day-and-age, with the rising popularity of cycling, and with what we figured was a desire by Hardee’s to appeal to a wider range of customers, that OF COURSE they’d put in a “good” bike rack. It looks like what we got was the cheapest, smallest, kid-bike-sized rack they could find (we presume not maliciously), but since there were no defined requirements… why not?

Lesson Learned #2: We need to get moving on presenting suitable Bike Parking statutes to the local governments for consideration and incorporation into their ordinances. That way, all future installations will be bike-friendly, secure, safe, accessible, convenient, etc.

Lesson Learned #3: Cultural Awareness. There has not been a strong, centralized cycling community here. Things which are very important to local bicyclists are completely “off the radar” of the average resident. We need to be consistent in spreading awareness, for safety, for the local economy, and for our share of parking & street-space with bike lanes.

– Here’s the kicker: If this bike rack ends up not being used, it can be removed. “See, we tried it and no one used it!”  Lets not let that happen! A great way to fix this is to have a steady supply of cycling customers who “overload” the rack and justifies expansion. When that happens, we can work on getting a retrofit for a “bike friendly” type of rack.

The newer “Wave” bike racks are just as nasty and unsupportive!

“Inverted U” bike racks provide two points-of-support for each bike, support locking the bike securely, AND hold 2 bikes per “U”, one on each side. Multi “U” strips are available where only 4 attachment points to the pavement are used, just like the current Hardee’s bike rack.

Some starting resources we can use to educate our retailers, business owners, and village officials include:
http://c.ymcdn.com/sites/www.apbp.org/resource/resmgr/publications/bicycle_parking_guidelines.pdf
http://www.fabb-bikes.org/12bikeparkingessentialsFABB.pdf

This entry was posted in Bicycling, Millennium Trail, Planning. Bookmark the permalink.

1 Response to About Hardee’s Bike Rack…