While we’re waiting for the economy to “rebound” (ain’t gonna happen, but that’s another post), it is important to really understand that a lot of the well-paying, benefits-providing jobs that existed before the recession just aren’t coming back. More and more of the “middle class” are finding it increasingly difficult to find work in their professions.

As if that’s not bad enough, there will still be a significant loss of even more jobs over the next decade as technology continues to replace many of the practices and processes which kept us employed.

According to an AP analysis of the changing job market:

The AP found that almost all the jobs disappearing are in industries that pay middle-class wages, ranging from $38,000 to $68,000. Jobs that form the backbone of the middle class in developed countries in Europe, North America and Asia.

In the United States, half of the 7.5 million jobs lost during the Great Recession paid middle-class wages, and the numbers are even more grim in the 17 European countries that use the euro as their currency. A total of 7.6 million midpay jobs disappeared in those countries from January 2008 through last June.

Those jobs are being replaced in many cases by machines and software that can do the same work better and cheaper.

The jobs they are being replaced with will pay absolutely miserable salaries… at least based on the needs of an average 2-car, house in the suburbs with a 30-year mortgage family. This is due in large part to the projected increase in service-sector jobs. 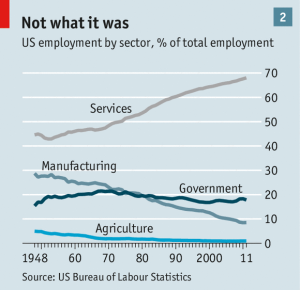 Jobs are disappearing not only for the “middle class”, but ALL income levels. Check out this excellent (and disheartening) graph by MIT researcher Andrew McAfee: 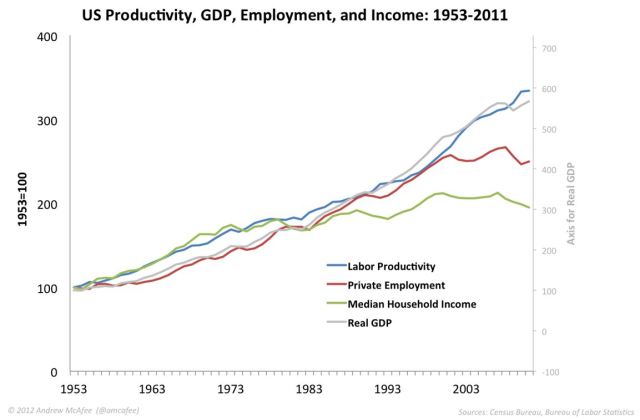 From his piece “The Great Decoupling of the US Economy“:

“We’ve been experiencing a long, slow decoupling between “output and productivity” (Blue & Grey) and “jobs and wages” (Red & Green). For more than three decades after the end of World War II all four of these measures went up together.

In the early 1980s the picture started to change for the average American worker. There were still a lot of jobs available, but they started to pay less well. Median household income became decoupled from the other three stats and grew more slowly than they did. By the time of the 2001 recession, median income was lagging behind pretty badly.

… digital technologies have been able to do routine work for a while now. This allows them to substitute for less-skilled and -educated workers, and puts a lot of downward pressure on the median wage. As computers and robots get more and more powerful while simultaneously getting cheaper and more widespread this phenomenon spreads, to the point where economically rational employers prefer buying more technology over hiring more workers.

I don’t see the four lines in the graph above re-converging any time soon.”

Of expected “new job growth for the near future, take a look at the annual salaries associated with the jobs in the chart below (showing most new jobs available) and see how well you can support your self or your family:

For more detail, you can read the article: “How Technology is Destroying Jobs“.

RLB isn’t in the position to land a “large” employer; we depend on companies around us. From that perspective, Lake County loses at least a couple of companies a year to WI, thanks to aggressive, consistent, and obviously tempting offerings by WI state and local officials, commercial property holders and partner financiers. Of course, Illinois has a rather unfavorable business climate, which has helped motivate potential employers to relocate to more favorable climes.

THAT is a BIG part of why we keep going on about “resilience“, about “not having all our eggs in one basket” as far as our local economic model is concerned, and why an interconnected, multi-user infrastructure is so important, why we need our own aggressive plan to not only attract existing businesses here but create conditions favorable to small and new-business start-ups and home-based businesses.

According to the AAA, the average cost in 2013 to own a sedan was over $9,000! At least one car in a 2-car family is often used for commuting to work from the suburbs; with fewer jobs, fewer breadwinners, and 2nd-cars for long-commutes less necessary… physically-accessible in-town jobs will be especially important. IN-TOWN jobs. “New Economy” jobs. “Sharing Economy” Jobs. Jobs of the type which didn’t exist before. 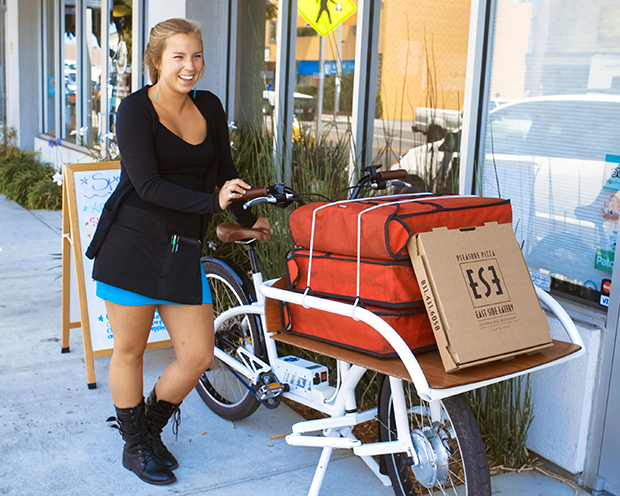 Current rules, ordinances, and “mindsets” are unprepared to handle these new types of jobs, nor can they easily deal with the structural and policy changes in residences and neighborhoods that would allow our residents to do more with their own homes to  significantly reduce expenses and cost-of-living… essential with fewer “traditional” jobs around.