This one has everyone in our little group agitated to one degree or another.

By now you’ve seen this building at the northeast corner of Rt. 83 and Rollins Road, a lonely little 2-unit strip site which housed a retailer of window treatments, a shoe store, a cell phone store… things like that.

Northeast corner of Rollins Road and Rt. 83.
Vacant but useable for several months prior to start of the Rollins Road Gateway construction project.

In fact, thousands of commuters see it every day. Hard to find a more visible retail site in RLB, and hard to overlook the fact that it has sat empty for months.

You know, despite the access issues it has (only one driveway, very close to our nastiest intersection), it is also one of the closest “strip” format buildings to the road, from which driver may clearly see if the businesses are open for the day or closed, clearly read the signage, quickly assess the close-by parking, etc. Most of the factors a driver would need to know if making a quick decision to pull in.

If you drive down a “Main Street” somewhere, you would likewise have all the storefronts much closer to you, to where you could gauge such factors for yourself, as you naturally driver slower and safer… part of what makes “Streets” such enjoyable multi-user environments. (Just try determining which stores are open, or having issues,  in a typical shopping center which is set back from the road a hundred feet or more!)

So, our gripe: Why, in the name of the Almighty Dollar, has this building which up until this week…
–  still had utilities to the site and electricity on (lights were on inside 24/7),
– has had normal unhindered access from Rollins from the time it was vacated,
– has had all of its customer parking available,
– didn’t have any construction (or detours) nearby which would inconvenience potential customers,
– has had unprecedented visibility (from the road) compared to our other retail locations,
– and is advertising to everyone driving by that Round Lake Beach has yet ANOTHER retail vacancy…

… WHY has it sat vacant all this time?

The obvious answer also completely misses the point of the question: “Well, the Rollins Road Gateway Project required the occupants to relocate because the building will be torn down.”

We’ll buy that as an answer for “Why did the long-term lease-holders move out of the building”? That does nothing however for why this very useable building has sat for so many months contributing nothing to either the local economy or the reputation of the village.

We’ve mentioned the practice of “Business Incubators” and “Buy Local” programs before, both in this blog and on our Facebook page. What a wonderful opportunity this represented for the RLB Village Elders and the Chamber of Commerce to make use of the “economic hit” of the construction project and try to turn lemons into lemonade by making the space available as “Pop UP” Business Sites!

“A “pop-up”, in case you haven’t heard, is typically a restaurant, retail outlet, or art production that occupies an unused building or outdoor space temporarily. Pop-ups can last a couple of days or up to several months.

Pop-ups can be spin-offs of established businesses and brands, or the efforts of people working together for the first time, sometimes to test the water for larger-scale ambitions.”

“Pop Up Business for Dummies” puts it this way: 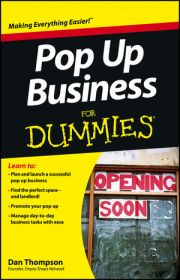 “To truly qualify as a Pop Up, a project should:

– Use an empty or under-used space.
– Be time-limited, with clear start and end dates.
– Not aim for permanence.
– Be designed for demountability and ease of removal.
– Have the potential to transfer to a different site.
– Be in some way exclusive, distinct or special.”

According to this 13-minute Michigan Radio segment:

It used to be, when you would think of a “pop-up business,” you would pretty much think of those Halloween stores that pop-up each September, or the fireworks tents each July, or the Christmas tree and wreath lots that appear each Thanksgiving.

But the “pop-up” concept is growing, and temporary businesses or exhibitions are gaining traction in cities and towns where the Great Recession left many empty storefronts.

And the pop-up works on so many levels, both for the entrepreneur and the business districts and cities who can see new life being breathed into buildings and areas that have been way too quiet.”

We do seasonally have all three of the Pop Ups mentioned above, with Halloween signage already up on the former Sears Hardware building…

… but NEVER anything else. Why is that?

Even a simple weekend public “Flea-Market” or Swap Meet is a type of pop-up “Bazaar” or market space, which is a given fact of life almost anywhere else in the world.

Well, it’s rather difficult to get short-term lease/rental agreements from shopping center owners who much prefer to keep units open for potential long-term business franchisees. As we’d rather not have to keep mentioning, if we had a “traditional” business district (AKA: “Downtown”), there would be many shops and storefronts, most (if not all) privately owned, with owners willing to negotiate for shorter-term occupancy which, from THEIR perspective, makes their properties look more marketable than “empties”.

What do we hope to see in a Pop-Up space? Ummm… what kind of stuff are we missing now? What do you have to drive out of town for? We’re certainly not going to follow a formula, or ratios of types of offerings. Part of the beauty of this model is the high degree of responsiveness to local & seasonal needs it can provide. What might make perfect sense in June might be absurd in January.

Christmas shopping madness is just around the corner, and we have many empty storefronts, and beginning business-owners trying to get started. Howzabout something like this:

“If given the chance to hang your own shingle on Main Street with the first few months rent-free [or at least seriously reduced]during the busiest shopping season, would it be enough incentive to start your own business?

Project Pop-Up jump-starts … economy by encouraging entrepreneurship and bringing life to vacant properties, which in turn revitalizes our downtowns.”

The Rollins Gateway Project gave us the circumstances to actually try something not rooted in 1970’s thinking (“If it’s not covered by Zoning or the Ordinances, it doesn’t exist”)!

Missed another one! We have GOT to become more willing to take chances, to be creative, and to do things at least a LITTLE differently than the last several decades.

This entry was posted in Business, Economics, Rollins Road Gateway. Bookmark the permalink.