A Look at the “Replacement Generation” – I

As we examine policies and practices which guide planning and construction, it is critical that we consider “Why do we think the things we do?”, as embodied into Zoning, Codes, and Ordinances. Some of our actions are also the result of cultural and societal norms and practicies (even many of our beloved Chistmas traditions are based on invented folk traditions in stories by Washington Irving).

Viewed retro-actively with the programmers’ dictum of “Garbage-In, Garbage-Out”, we see that the “Baby Boomers” codified “bad thinking” and readily built un-friendly, sprawl-inducing, socially-deadening, economically-draining kitsch thinking all the while they  were doing something good because it “complies with code”.

The “Boomers” are about to hit retirement-age en-masse, and turn over the reins of business and government to their “replacement generation”, commonly called “Millenials” (who will form one-third of the population by 2020). It is CRITICAL that current residents, business owners, developers and local government understands the difference in mindset, education, and expectations between the “Archie Bunker” crowd and that of the younger people.

TaskRabbit: Kind of like ebay for chores and errands; a way to earn Extra Income in the New Economy!

This difference has already led to conflicts in the business world, academia, and civic life, with differing expectations of levels of performance, of the role of training and education, of rights versus responsibilities, of sustainability and stewardship… down to the level of what can be done with privately-owned property. These difference and the changes they engender have created a lot of “angst” among the more senior crowd who have grown up with a fixed world-view and concrete expectations of things like “property value”.

“It’s important to realize that young people entering the corporate world now are the product of a very different upbringing than any prior generation. Having been educated on a planet that is newly and deeply networked geographically, economically, and informationally, we have had to adapt to unprecedented speeds of intellectual paradigm shifts and scales of competition. The way we think, the way we learn, and the way we work have been fundamentally transformed…”

Millenials can certainly be “Team Players” but if they see something that looks amiss, they’ll be much more likely to speak up about it. This can appear “confrontational” to Village Board members who were raised to say at least three nice things about a subject or person before saying anything bad about them.

“Liberal arts curriculum promotes challenging established thought and systemic stagnation. We are taught to think that, if something has been a certain way for very long, there’s a good possibility that it’s no longer good enough. Moreover, even before we’re ready — perhaps especially before we’re ready — we attempt to contribute solutions to these potential problems in our academic work.”

There have been enough “old school” people, places, and procedures around to accomodate the Boomers, who spent their entire lives chasing the American Dream (as presented to them by the financiers Wall Street and the hucksters on Madison Avenue)… but they are running out of places to hide, where they can reassure themselves that the measure of their lives can accurately be assessed by the size of their homes and how much stuff is in them. “Change” is now very hard for the Boomers;  change which forces them to admit that maybe they were wrong in some critical worldview or socio-economic outlook… even harder.

“Much of what prior generations have learned through work experience and apprenticeships, we have learned in ways that are not so easily reflected on a curriculum vitae. Our incisive questioning can challenge years of established thought and impel costly change. But this cannot be mistaken for naïveté. It is real, forward-thinking insight.

We Millennials are not used to taking little steps and gradually wading into an ocean of knowledge; we’re accustomed to diving in head first, rapidly adjusting, taking ownership of our successes and failures. We’re a generation with a new work ethic and tremendous potential…  That young people all over the world are creating brands and technologies that challenge and overshadow decades old institutions — this startup revolution — is evidence enough of the great power of Millennial thinking.”

Their independent thinking, their “visioning”, is not burdened by being vested in “keeping things the way they are“. In terms of municipal planning, building community, actually “living” instead of just “making a living”… they see clearly what we left behind when we as a nation abandoned planning for PEOPLE.  They value “walkability” and the ability to connect, having “places”, they grew up hearing about depletion of natural resources, about pollution and the impact on the environment, they care about the ethical treatment of our food animals, and thanks to their comfort with the internet and connections to people the world over, they KNOW that we can do better than becoming a “Suburban Nation“. 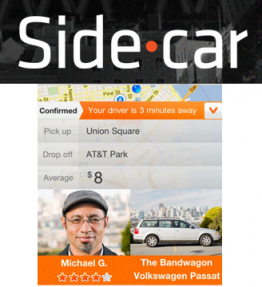 SideCar is a real-time ridesharing community that connects drivers with spare seats in their car to passengers who need instant rides, via a user-friendly proprietary smartphone technology. It helps drivers because they use their own car and help cover the costs of maintenance – all while meeting people in the city. Meanwhile for passengers it makes it easy to get a ride, cheaper than alternatives, and gives them a unique personal interaction.

“What if the Millennials’ aversion to car-buying isn’t a temporary side effect of the recession, but part of a permanent generational shift in tastes and spending habits? It’s a question that applies not only to cars, but to several other traditional categories of big spending—and its answer has large implications for the future shape of the economy.”

Zipcar: One of the leading car-sharing websites, and part of what makes it possible to live without actually OWNING a car.

Will the Millenials, as the bulk of our future middle-class, WANT to stay in Round Lake Beach to raise their families? Will our village have what it takes to compete against other locales, and successfully lure new businesses and families which will call this home?

If nothing major changes in our infrastructure or mindset against planning, we will have a highly-challenging time in any time of poor economy, (not to mention getting through the additional hit on our local economy expected to be caused by the Rt. 83/Rollins Road “Gateway” Project).

Forbes.com Link: “Millennials Are Redefining Work, Corporations Should Take Advantage”
Inc.com Link: “Why Gen Y Doesn’t Care About Cars”
The Atlantic Link: “The Cheapest Generation – Why Millennials aren’t buying cars or houses, and what that means for the economy“