Low-value neighborhoods by design: Parks I

Steve Mouzon (head of Mouzon Design, an architecture and urban design firm) makes it pretty clear why our newer subdivisions have such a lousy relationship to the open spaces (mostly parks) contained within. This leads to these parks and spaces being greatly under-utilized and having less value (both monetary and practical) than they could. All because they were designed that way…

“A typical subdivision is miserly, selfishly cutting up every scrap of available land for sale under the mistaken assumption that this will make more money for the developer, but this is a half-baked view even in the short term.

You can give land back to a neighborhood in several good ways and one bad way. First the bad news: amorphous left-over “green space,” especially when it’s located behind the houses in a thoughtless manner, really does waste land because it creates so little value.”

Take a look below at “Willow Ridge Park”, a “pocket park” in the Willow Ridge subdivision (south of Country Walk). The builder was able to “donate” land for this park, a rather  awkward triangle of property. Rather than the Village insisting on decent design and land-use from the developer, all eyes were on the $$$ of property-tax and sales revenue from future residents.

The view to the east (through a rusty chain-link fence) is to a gravel-covered above-ground propane tank, its encircling driveway, and two monolithic (and rather boring) buildings in the industrial park… and their dumpsters. (Doesn’t that just want to make you play?) Oh, and only one way in/out of the park.

What else makes this less/low value? From the aspect of how we humans view things, as a universal standard, the front of a private property is considered its “public” face, whereas the back is considered “private” space. If you’ve ever been in one of these parks where you’re staring into the backyards of all the surrounding homes, you’ve somehow felt almost like you’re intruding; the experience is less than welcoming and inviting. The “outdoor room” in the rear of each home is also that much less private as well, where sunbathing, gardening, hanging clothes to dry… everything… is everyone else’s business. Forever.

Below is “Wilma Turner” Park… same situation. Greatly underutilized space. All its potential wasted to be mostly a grassy lot with a gym set. (We’ve lived near both of these parks for 14+ years, and have raised a son here in RLB… we are speaking from experience!)  Like the park above, there is only ONE way in; to have a much-needed measly 10′ right-of-way for access between homes on the opposite side is simply out of the question! 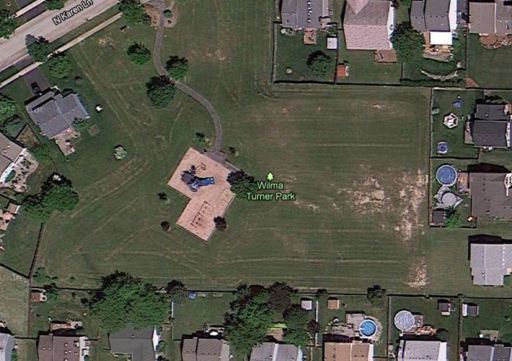 “Now the good news: if you design the open space as parks, greens, squares, plazas, and playgrounds, and if you put them in front of the houses rather than behind, you can create a great deal of value.”

So check out THIS park in Liberyville, where it is designed (planned?) as a public amenity for the residents, not as an afterthought. It exists in its own defined space, accessible from ALL sides. It FEELS public, and is made easy to get to. Value is created by having a vibrant WELL-USED green space out the front windows of all the homes surrounding the space. One space, shared by all in a meaningful way.

“A long view across a space significantly wider than a street increases the real estate value of all buildings facing the long view, usually by 25% or more. Turn the fronts of the houses to the view with a street (or occasionally a walk) running between the houses and the view, and you carry that value up to two blocks deep into the adjacent urbanism because those people can walk to the long view as well.

That increase in real estate value can almost immediately pay for the land given up for parks, greens, squares, plazas, and parks. Over the long term, as the neighborhood is built out, it builds a reputation of being one of the more desirable places in town, cementing the resilience of that value. These principles apply both to new neighborhood design and also to sprawl recovery.”

As we look at what we can do to increase the real and perceived values of this village we call home, remember some of these factors at work. There is not a lot of undeveloped land remaining in RLB, and it’d be a hard-sell with current mindsets to devote a chuck of real estate to something which doesn’t directly appear to generate any revenue.

What can we do to make our parks more useable and accesible? Have we asked the users lately? Some of the older parks are nothing but fields surrounded by chain-link fence… inviting? What would it take to bring YOU out more often and use parks for what parks  are intended to be?

This entry was posted in Children, Parks, Planning, Walkability. Bookmark the permalink.