Here’s another example of what can happen when the people actually living and working in a place get to decide what to do with it!

The Department of Transportation (DOT) approved the Fulton Area Business (FAB) Alliance’s application to make the plaza permanent, forever closing off Putnam Avenue between Grand Avenue and Fulton street to any traffic other than pedestrian… … the development will pave the way for a build-out of the new space, based on community input. 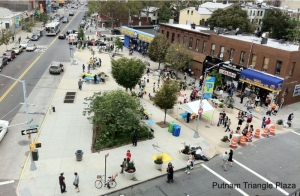 “Available for use by the entire community, the Putnam Triangle Plaza is a spot where you can soak up the sun, read a paper, eat lunch, do some work, play a few games of chess or hold your own event.”

The plaza, installed by the DOT, celebrated its opening in September 2012 with a FAB Alliance-hosted block party, complete with music, art, dancing and activities for the kids.

Though the news of the plaza’s permanence comes is welcomed by many, some residents and business owners initially expressed concerns with the space, saying it would stop the “currents of the streets” and negatively impact businesses.

Check out that quote about concerns of stopping the “currents of the street”. That happens a lot when you try new things, especially with “place making” concepts. Change is difficult for a lot of people; vision is even more challenging.

Starting with a “What if?” by a couple of the local business owners, followed by some patio chairs, portable planters, pop-up canopies and traffic barrels, the “users” of this space, previously used only for cars, created value and place. They did so inexpensively, and they did so from the “bottom-up”. Didn’t take a big-budget study (or big-budget at all).

“Lighter, Quicker, Cheaper” (LQC) works wonders as a practical place-making tool! Where could we “experiment” in Round Lake Beach… how about a couple of places near eateries so we finally have some outdoor eating & gathering spots?

This entry was posted in Economics, Planning. Bookmark the permalink.